The cure of Shri Vasu Bhardwaj is nothing short of a miracle where medical science failed to cure the case of Multiple Myeloma in an advanced stage, the grace of Shri Guru Granth Sahib has completely healed him.

The cure of Shri Vasu Bhardwaj is nothing short of a miracle where medical science failed to cure the case of Multiple Myeloma in an advanced stage, the grace of Shri Guru Granth Sahib has completely healed him. We have been serving the cause of helpless and desperate patients suffering from incurable diseases of all type-surgical and medical. It was the benevolence of God and Shri Guru Granth Sahib that we have been able to contribute a lot to this cause.
After all why this miracle of cure happens so regularly and consistently? The reasons and answers could be found in Gurbani. Gurbani is God Himself. The tenth master of the Sikhs Shri Guru Gobind Singh Ji had bowed before Shri Guru Granth Sahib and had asked Sikha to observe Shri Granth Sahib as eternal and living Guru. If any Sikh wanted to talk to Him, the Guru Granth Sahib would respond in the form of written Shabads (Gurbani). And Sikhs can take directions from Shri Guru Granth Sahib for anything including their day-to-day life, in sickness, in health, in happy moments, in sad moments and even in trying circumstances. If they do so victory would always be there for them, they would never lose in their life any time. The tragedy is that we have forgotten His teachings and do not recognise the powers that He has and the amount of care He bestows upon his Sikha. Shri Guru Gobind Singh had ordained that there would not be another Guru in flesh and blood after His departure and he had invested all his powers in Shri Guru Granth Sahib. 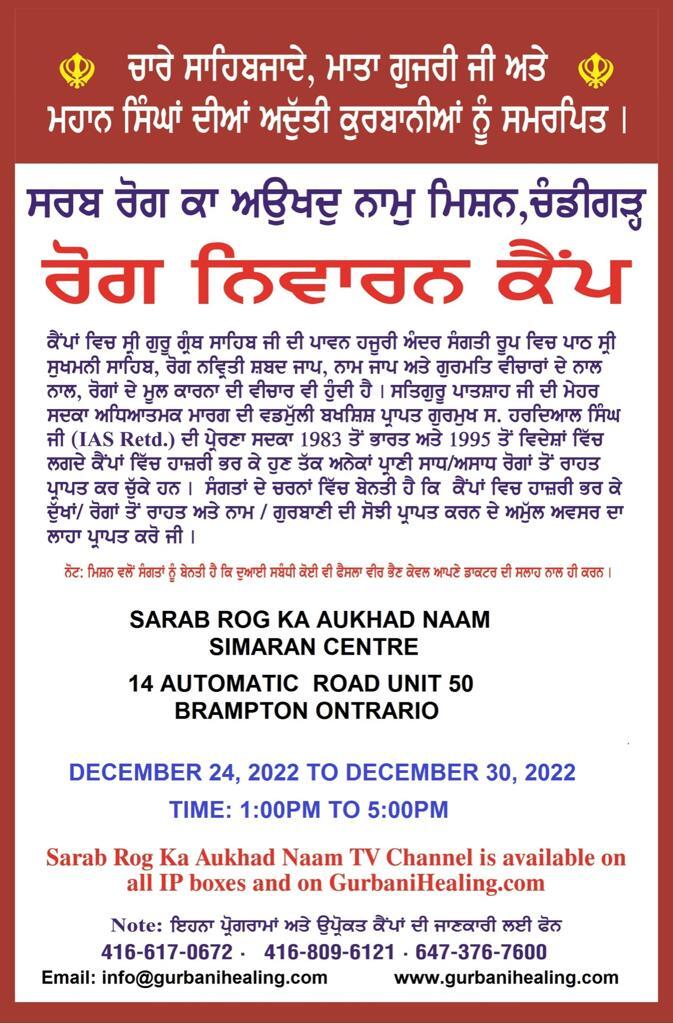 Through the teachings of Shri Guru Granth Sahib we learn that the cause of sickness is forgetting God and the cure lies in remembering Him. Through the service of Guru comes the happiness which would be everlasting and no problem or worry would ever cross the mind anytime. One can live in ecstasy all the time. The Service of Guru is to follow His teachings in letter and spirit. This method of cure was defined and initiated by S. Hardial Singh IAS Retd. in 1983. He suffered from heart enlargement and used to have fever even after mild exertion. He could not be cured with any system of medicine even by the top most men in the respective fields. He prayed at a historic place sanctified by Shri Guru Gobind Singh Ji at Gurdwara Paonta Sahib (H.P.) He got well and his heart size was reduced to normal. He tried this method of cure under the supervision of expert doctors of Medical College Amritsar and he found similar results. On the request of patients this Sarab Rog Ka Aukhad Nam Mission was founded by him. Now this mission has many branches in India and abroad.

Ready to Make a Change?

The Mission’s primary objective was to disseminate the message of Gurbani, the power of Divine Name and their ability to cure mental and physical ailments to the Gursikh sangat.